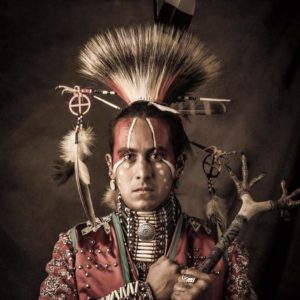 Gallery Artist. Smokey Cruz’s early childhood was shaped by the feeling of constant movement in travels between family members in northern and southern California. The memory of that passing landscape still appears in some form or another in many of his current works. A descendant of the original inhabitants of northern Mexico and southern Arizona, Cruz says, “There’s a spirit in the land, and I’m trying to find a way to bring that to light.”

Determined to forge his own path in life from an early age, he started and ran many small businesses, directed a neighborhood community center focused on putting first nations principles into practice, and pursued an interest in art by attending various schools of design. Of the energy it takes to be involved in so many different businesses, art and community activities, he says his driving motivations in his belief in the significance of his actions.

Challenged as a young man by a chronic health condition that would have sidelined many, he instead chose to focus on hs refusal to let that condition control his life. In the process he proved to himself that he could indeed live his life on his own terms.

All of these challenges and the strength it took to meet and overcome them have led to work that shows a certain power drawn from the land he still loves to travel at every opportunity, as well as hints of the dreamlike aspect of Surrealism that he has long been inspired by.