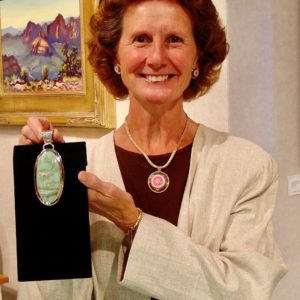 Nancy was born and raised in the Chicago area, graduated from the University of Illinois, and upon an early retirement in 1989, moved with her family to Sedona.

After joining the Sedona Gem and Mineral Club in 1992, she met and became good friends with long-time member Charles Kacsur, who, before retirement, had been a master jeweler and industrial arts teacher in New York. At age 83, he was still creating extraordinary lapidary and jewelry work as a hobby in his home in Sedona where he had resided since 1974. One day, after rockhounding for the first time with him and several friends in the Camp Verde area, he invited Nancy into his home shop to cut and polish one of the candy stripe travertine rocks she had just found that day. At Charlie’s age, he was thankful that Nancy had taken him on the back roads to the hunting place he so dearly loved. She was equally thankful to have this opportunity to learn how to make a beautiful specimen out of one of her finds. It was the start of their six-year friendship.

About one year after their meeting, Charlie was diagnosed with stomach cancer and Nancy, with the help of her family, became his devoted caregiver. During the six years of their student/teacher friendship, despite his constant battle with cancer, he continued to teach her the basics of silversmithing and jewelry fabrication, as well as lapidary, hand-made sphere-making, woodworking, and general shop skills when his strength would permit. His insistence on perfection and attention to detail made her strive for excellence. He continued her education until the week before he died in 1999. Charlie’s time and knowledge was one of the greatest gifts Nancy has ever received.

All of Nancy’s silver, copper, and gold jewelry, including her chains, is completely hand-fabricated. She also makes many of the unique cabochon stones, which are cut and polished in her home shop. A cabochon, or “cab”, is a gemstone that has been shaped and polished as opposed to facetted. The resulting form is usually convex with a rounded top and a flat back. The normal procedure to make a cab is to cut a slice of the rough rock with a diamond saw, then stencil and trim a shape. The next step is to grind the shape with silicon carbide or diamond wheels, making the edges beveled and the top smoothed to a uniform dome, followed by a high polish. Cutting a cab takes time and patience. Nancy seeks out unique patterns in stone and strives to maximize the beauty of that stone.

One of Nancy’s favorite specialties is designing and creating various styles of handmade chains made from fine silver, sterling, copper, and gold wire. It gives her great satisfaction to make every link perfect with “invisible” solder joints and to have the finished creation sparkle with a perfect polish.

One of her trademarks is the handmade Roman or Etruscan chain, which was the first chain Charlie taught her to make. These chains date back to the 7th century BC.

The foundation of her work is the custom, free form, unique cabs and her handmade chains.