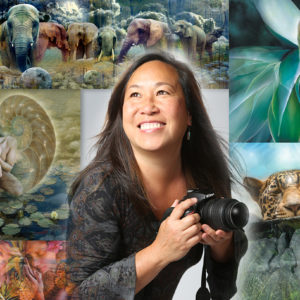 Born in Toronto, Canada, Carolyn Quan is a multiple award-winning internationally collected fine art photo collage artist, based in the American Southwest. She has been featured in over 20 publications as well as on radio, television and in a documentary film. Two of her nudes are in the permanent collection of art at The Kinsey Institute. She is the recipient of 17 American Art Awards as well as numerous other awards both national and international. Her work is inspired by nature, spirituality, and humankind. Her fine art career began after a successful career as an Art Director and Graphic Designer in the music and entertainment industries in Toronto and New York City. During her career in design she had the honor of working with many celebrity recording artists including Aretha Franklin, Grateful Dead, Barry Manilow, Carly Simon, Eurythmics, and Yes, to name just a few. Shortly after the tragic events of 9-11 Carolyn began her journey as a fine artist exhibiting her work locally and internationally, at national juried fine art festivals, and from her two fine art galleries in Hawaii when she was a resident of Maui and Oahu. Her “Spirits of the Desert” limited edition series is inspired by the beauty and energy of Sedona and other parts of the American Southwest.