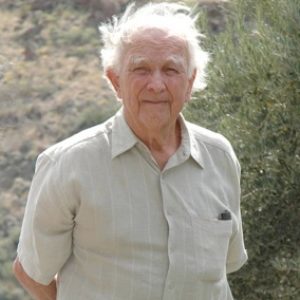 John Henry Waddell, born in Des Moines, Iowa in 1921, began teaching art to adults when he was 16. After Army service, he achieved his MFA and MAE from the School of the Art Institute of Chicago. Waddell headed art education at the New Bauhaus in Chicago, then at Arizona State University, before retiring from university teaching at age 40 to allow full time for his mostly figurative art.

In 1963, the church bombing in Birmingham, Alabama that killed four young black girls, prompted Waddell to create a memorial monument entitled “That Which Might Have Been,” a grouping of four bronze figures, representing the women these little girls might have grown up to be. This work, now displayed at Carver Civil Rights Museum, marks a turning point in Waddell’s work. Though earlier he had been a social significance painter, representing the ills of society, his interest now turned to the beauty of individuals, and later too, their potential for positive interaction.

In 1964 Waddell and his family moved to Greece with a commission to create the public sculpture “Family.” During the following two and a half years, he exhibited his work in Athens.

As Waddell’s work in groupings of figures continued, the need for more studio space and creative serenity took him further away from America’s art centers and deeper into the remote wilds of the Southwest landscape. Here he built a magnificent studio. Apprentices came from all over the world to study with Waddell. The 12 over life size figure composition “Dance” was completed here.